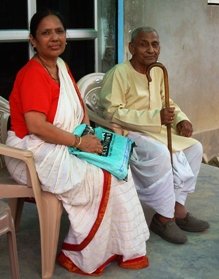 Her father, grandfather and great grandfather were all emminent scholars, authors and university professors and from her earliest years she was immersed in this world of pandits and Sanskrit scholars. Her elder brother, the late Professor R K Mishra was Head of the Sanskrit Department at Allahabad University.

In the Maithil geneological records, along with the names and residence details, honorific titles, or epithets, are also given describing scholarly status. These honorifics could be divided into four categories:

No other family of Maithil Brahmins has perhaps, a greater number of Mahamahopadhyayas than this family.

Of the fifteen Mahamahopadhyayas of Mrs Mishra's family lineage of Sanskrit scholars five luminaries in particular stand out:

Mahamahopadhyaya Keshav Mishra (a well-known law-giver at the court of Manikyachandra, the ruler of Garhwal) 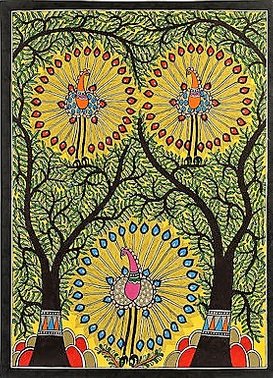 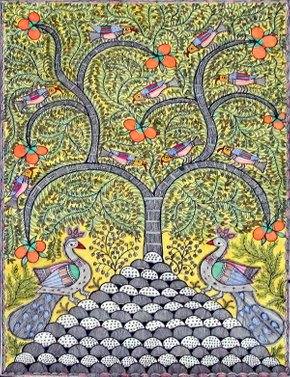 Sat (the noble one) 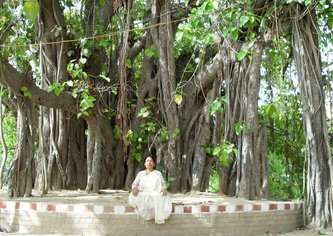 Mrs Mishra belongs to a very eminent family of Maithil Brahmins; one that can trace its ancestry back more than twenty-five generations (according to official records).

She studied, for most of her life, under the guidance of her father, the late Dr Jayakant Mishra.

These books have been reprinted several times and are well-known all over India.

In 1922 he was appointed professor at Benares Hindu University. In the same year he was awarded the highest title of Mahamahopadhyaya by the Government of India.

He had three sons, the eldest of whom was Mahamahopadhyaya Dr Umesh Mishra.

At his passing in 1926, his dearest pupil and eminent scholar Mahamahopadhyaya Dr Ganganatha Jha, wrote the following tribute in the form of a Sanskrit verse:

Glorious in ancestry, splendid in studiousness, successful in the assemblies of scholars, great in the hour of death, triumphant in achieving the Final Emancipation of the Soul, Jayadeva always won the day 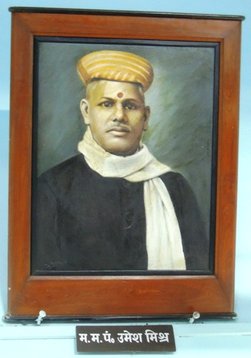 Mahamahopadhyaya Umesh Mishra began his studies at a very young age. He would have first learned the Tirhuta alphabet at home. He would later learn the Devanagari and Roman alphabets. According to tradition his primary education would have been taught by his father. This would have consisted of Amarakosh, Laghu Siddhanta Kaumudi, Hitopidesha and Raghwamsha. After completing this course of traditional training, he was admitted to the Bengali Tola High School at Varanasi (Benaras). From there he passed the Matriculation examination in 1914, at the age of eighteen, obtaining the highest marks in Sanskrit, for which he was awarded the Shiromani gold medal.

On completing his education Mahamahopadhyaya Umesh Mishra moved to Allahabad in 1923. From 1922 onwards he wrote articles in his mother tongue that appeared in various Maithili magazines. His contribution to the promotion of Maithili language, literature and culture is invaluable. He collected a large amount of material in the form of books, periodicals, manuscripts etc. This was continued by his son Dr Jayakant Mishra so that today the family has perhaps the largest ever collection of Maithili literature.

Mahamahopadhyaya Umesh Mishra laid the foundations of several institutions. He established the All India Maithil Sahitya Samiti, wrote countless articles in Maithili, Sanskrit, Hindi and English languages. He appeared several times on All India Radio. Many of his essays were published as well as his translations of Maithili classics. His publications are too numerous to mention here but the following list will suffice to give you an idea of the scope of his work:

Rigveda me Karma Vichar (Theory of Karma in Rig Veda)

Conception of Matter according to Nayaya-Vaisesika (A publication of research work for his Doctorate of Literature,giving a comprehensive treatment of all the seven elements separately - Dravya, Guna, Karma, Samanya, Vishekhe, Samavaya and Abhava)

Gaudapada and MatharvothPramanas in SankhyaMurarestritiyah Panthah (The Third Approach of Murari, presented by him in the All India Oriental Conference and published in its Proceedings in 1928 it developed a wholly new school of Mimamsa thought)

Law of Karman in the Vedic Samhitas

Smriti Theory according to Nyaya Vaisesika

Background of BadarayanasutraJiva: Its Movement and Uplift Annihilation of Karman as the Cause of Moksa according to Padmapadacharya

Mahamahopadhyaya Umesh Mishra also edited many works such as:

A Critical Study of Bhagavadgita

On the science of Dharmashastra (Laws of Conduct) he edited three books:

On Grammar, he edited three works of his father:

As mentioned above he was the founder of several institutions - such as the Mithila Institute of Sanskrit, the Kameshwar Singh Darbhanga Sanskrit University (of which he was the first Vice-Chancellor), and the All India Maithili Sahitya Samiti.

He also established the Darbhanga Session of All India Oriental Conference.

Most of the above information has been extracted from the short biography of Umesh Mishra, originally written in Maithili by the Sanskritist and Maithili litterateur Pandit Govinda Jha, to whom we are extremely grateful.

This work has been translated into English by Dr Jayakant Mishra.

It is currently available published by the Sahitya Akademi in New Delhi. 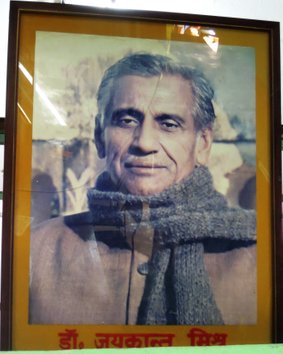 Dr Jayakant Mishra, in the Maithili world, was the literary successor of his father Mahamahopadhyaya Umesh Mishra.

He was the father and mentor of Mrs Mishra, and the inspiration behind Anadi Anant.

Professor Mishra was a dedicated scholar and discerning critic of Maithili language and literature. He devoted more than half a century to the study and appreciation of Maithili, as perhaps no other single individual has hitherto been able to do.

It has been said that:

"His name will be handed down to posterity in India as the greatest benefactor of Maithili at present day after that of the illustrious George Abraham Grierson, and will earn for him gratitude of sixteen millions of Maithili speakers in the first instance and of the scholarly world of the whole of India, in the second".

Dr Mishra was brought up and educated in Allahabad where his father was a Sanskrit Professor at the university. In those days Allahabad had become the centre of modern European traditions in Northern India and he had the good fortune of imbibing them through his teacher Professor Amarnatha Jha.

He had a brilliant career in the Department of English Studies and Modern European Languages, and hence offered a lectureship in 1944 after getting his M.A. degree in English language and literature in 1943.

He retired as Professor and Head of the Department in 1983. He was selected as Visiting Fellow in English at Sagar University from 1985 to 1988. He was called upon to the All India Board for Research Awards in Humanities in 1986 in Mysore. He was also the Dean, Faculty of Languages and Social Sciences, Chitrakoot Gramodaya Visvavidyalaya from 1992 to 1994. 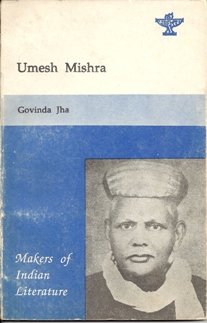 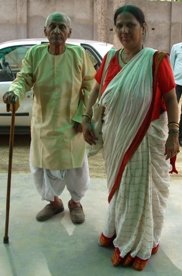 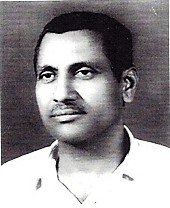 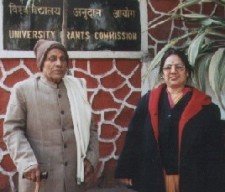 Although Dr Mishra earned his livelihood as a renowned scholar of English language and literature, he devoted almost his entire life in the service of Maithili language and literature. Dr Mishra became interested in his mother tongue Maithili and his native region Mithila at an early age, as matters connected with them used to be discussed in his home and he had the unique opportunity to access the collection of Maithili books in his father's library. Another influence was Dr Ganga Natha Jha, the then Vice-chancellor of Allahabad University.

Dr Mishra's juvenile writings used to be circulated in a handwritten children's magazine of his village called Balvinod. The first significant piece of literary criticism, which got publicity, was a long review of Gangapati's novelette Sushila, which was published in the celebrated Maithili weekly Mithila Mihir in 1943. Soon thereafter he organized a Sahitya Samiti in the university and took steps to hold literary gatherings frequently.

The Indian P.E.N. attracted his attention and he became attached to it as a Maithili writer since 1947. He attended its meetings held at Baroda (1957), Bhubaneshwar (1959), and Lucknow (1964). He began his studies in Maithili literature under the guidance of Professor Amarnatha Jha. Subsequently, his reputation grew as an eminent writer of Maithili. It was in this context that he planned and published his 'A History of Maithili Literature' in two volumes and 'An Introduction to the Folk Literature' in two parts. 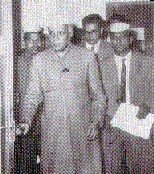 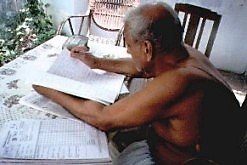 The Maithili Samachar, a fortnightly bulletin of the All India Maithili Sahitya Samiti Allahabad, being edited by Dr Mishra for more than 50 years, has created bonds of affinity, purposefulness, creativity and momentum in the world of Maithili letters. 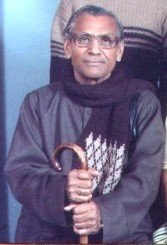 After a chance meeting with Pandit Jawaharlal Nehru, Dr Mishra organized a historic National Maithili Book Exhibition in Delhi in 1963 and made concerted efforts to publish scholarly editions of Maithili classics. It was Dr Mishra's critical essays on Maithili that poured in plenty in various journals and forums. He was invited to preside over various meets. His most important contribution was made on the study of Kirtania Drama in 1970. His magnum opus is Brihat Maithili Sabdakosa of which two volumes have come out from Simla and the remaining volumes are in the course of publication. 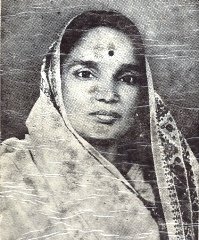 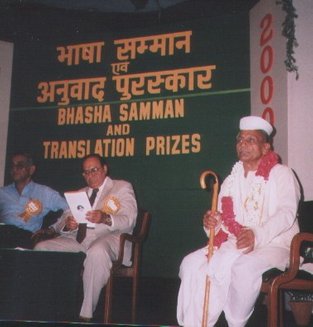 1939 Married Shreemati A Devi (a Maithili poetess and writer)

1963-1982 Member, Advisory Board and General Council of Sahitya Akademi 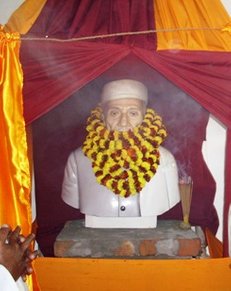 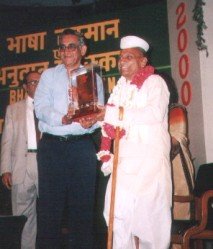 The Anadi Anant Shop is now open; but with extra safety restrictions  in place due to Covid-19

Some of our classes are now